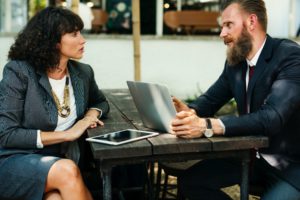 I was lucky enough to attend a workshop run by Dr John Pearse PhD, C.Psychol, FRSM. John is a Chartered Psychologist, a member of the British Psychological Society and an associate member of the Division of Forensic Psychology. He specialises in research in the area of interviewing and evaluating truthfulness, and has recently undertaken a confidential review of police interviewing of terrorist suspects in the UK. So I was under no illusion that he knew exactly what he was talking about. Listening to him was fascinating, and it made me think of the relevance to recruitment.

It goes without saying that in pretty much every candidate hire, contract or perm, there will be an interview. Whether it’s by Skype, phone, or in person, it’s common practice to get the candidate in front of the client, or in front of you if you are recruiting internally. So it makes sense to help your candidates at their interviews, and help yourselves when you are interviewing for your own staff.

But there is a lot more to determining how an interview is going than the answers the candidate is giving. However seasoned the interviewer is, they can still have the wool pulled over their eyes by a cunning candidate. Learning how to read others is the best way to see if someone you’re interviewing is being truthful, or if they’re just feeding you a bunch of lies. And learning about how your own behaviour can be read is invaluable for your candidates.

Most of us think that we are able to recognise body language, and we’re quick to cite examples like crossed arms means defensiveness. What I learned however, is that it is emotions that are displayed universally whereas body language is not. That is because emotions are spontaneous. Body language is individual.

There are actually five communication channels that you should be attentive to:

1) Facial expressions – Under some circumstances, emotions can be relayed on our faces in less than a fifth of a second. Watching how someone initially reacts to something can reveal how they are really feeling. If you can, video an interview and play it back to see what you missed! Inconsistent emotions can be a sign of deception. I was really interested to learn that research has found that facial expressions, such as shame or guilt, look the same on faces all over the world.

2) Body language – Despite what we may think, body language is harder to read than facial expressions. Once you get to know someone, their body language can start to reveal how they are feeling. That means it’s far harder to use this communication channel to assess a candidate during an interview. So maybe you shouldn’t put too much emphasis on it after all.

3) Voice – We sometimes pay too much attention about what someone is saying instead of how they are saying it. I learned that anxiety can soften a voice and make it higher pitched. Once you know these things, it’s amazing what you can pick up about someone.

4) Verbal style – If you know how someone normally responds, then you may be able to tell if they are telling a fib! Their word flow may differ, or the structure of their sentences may change. If you have been chatting easily for a while when the interviewee’s verbal style alters, they may not be being entirely straight with you. If they speak spontaneously, giving lots of detail, and wandering off on a tangent, they’re more likely to be telling the truth. Conversely, neat and rehearsed responses may be previously constructed lies.

5) Verbal content – If someone’s vocabulary is different to what they usually use, they may be using a fabricated story.

Sometimes we give interviewees the benefit of the doubt and put much of their behaviour down to nerves, but there are plenty of people out there who lie their way to get a job or promotion. What we should be doing is gathering actual evidence about the interviewee’s behaviour throughout the meeting, then considering it objectively, before judging them. It’s important to remove our own biases and emotions, and think about why they might be exhibiting certain behaviours.

And for your candidates? I think it’s really important that they have this information too. Obviously you don’t want to teach them to lie their way through an interview – that’s not going to help your drop out rate at all. But if they are aware of how they can be perceived it may help them deliver a coherent and more polished version of themselves.

If you need any further information on this or if Cognitive Law can be of any assistance, please do not hesitate to get in touch with Lucy Tarrant on 0333 400 4499 or lucy.tarrant@cognitivelaw.co.uk . Otherwise, thank you for reading this blog.

The Recruitment Business, from Growth to Exit
How do you feel about the Government’s call for evidence on Non-Compete clauses in restrictive covenants?
Contact Us
Send Us a Message
Head Office