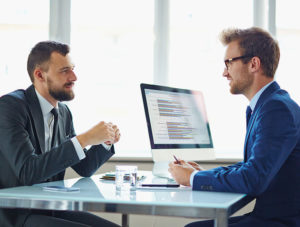 Recruitment Consultants cannot simply hand the CV of a candidate to a client and expect to receive an introduction fee. They have to introduce the candidate to the role itself; otherwise what’s the point of a client using a Recruitment Agency?

This mainly applies to contingent recruitment, but in order to ensure that the Recruitment Agency is introducing the candidate to the role, Consultants must be alive to the need to follow step-by-step procedures, and the consequences of failing to do so.

There have been many instances when Recruitment Agencies have given speculative information about a candidate to a client, and left it at that. The client subsequently engages the candidate and the agency tries to bill the client. No other interaction takes place, so how can the agency justify an introduction fee?

Obviously it is of paramount importance for Recruitment Agencies to introduce a candidate to a client together with their terms and conditions relating to introduction, but is that enough to secure justification for a fee?

A recent unreported case that deals with this is QED Legal LLP v Fisher Jones Greenwood LLP [2015]. QED sent unsolicited emails to a firm of solicitors containing the name and select details of a candidate, together with its standard terms and conditions. Approximately a month and a half later, an enquiry was made by the firm of solicitors as to the availability of the candidate or other similar candidates. In its response, the recruitment agency confirmed that the candidate had been placed elsewhere and was therefore unavailable.

Five months after the initial details were sent through to the firm of solicitors, the candidate was employed by them following a direct application for an advertised position.

QED sought to persuade the Court that the solicitor’s course of conduct created a binding contract, specifically because it had made enquiries of the agency in relation to the candidate.

Lawrence Adams representing the Defendant argued that no such contract could have existed as the handful of documents relied upon as constituting the contract could not, on a true construction, be said to have contained a contractual offer and an acceptance of that offer. Relying on the case of Stevenson, Jacques & Co -v- McLean (1880) 5 QBD 346, Mr. Adams submitted that the documents merely went to show a request for further information.

In dismissing the Claimant’s claim, District Judge Shanks, sitting at Chelmsford County Court agreed with the Defendant and found that the firm of solicitors’ response to the email was that of a general enquiry rather than an acceptance of any alleged offer.

That case clearly shows that it wasn’t enough to introduce the candidate to the firm. It wasn’t even enough to say that the agency’s terms of business bound the firm to pay an introduction fee. A fee is only payable if the agency is effective in introducing the candidate to the role. In this case the chain of introduction had been broken and the agency’s terms of business hadn’t come into effect.

It’s a bit like selling a house; the estate agent can’t just email the sales particulars to house hunters and expect to get a fee when they buy the house. The estate agent has to be instrumental in effecting the actual sale to those buyers to whom they introduced the house.

There is another, better known, case that highlights the similarity, and the importance of effective introduction, Foxtons Ltd v Pelkey Bicknell [2008] EWCA Civ 419. On 15 October 2004, the first defendant appointed the claimant estate agents on a sole agency basis to sell her house, on their standard conditions of appointment. The terms of appointment stated that the claimant’s standard rate of commission was 2.25% of the sale price achieved if it was appointed on a sole agency basis, and 3% if it was appointed on a multiple agency basis.

Following its appointment as sole agent, the claimant put the house on the market and showed the property to L. The house didn’t sell and as the claimant failed to secure a sale, the sole agency agreement was ended and a multiple agency agreement was entered into. A third party agent then showed the property to L, who agreed to purchase it for £1.15m. The first defendant therefore paid the third party agency its agreed commission.

Subsequently, the first defendant instructed the claimant to assist her in finding a property to rent. The claimant discovered that the first defendant’s former home had been sold to L and began proceedings against her for the recovery of its commission. The claimant maintained that, pursuant to the sole agency contract, it was entitled to commission if contracts had been exchanged with ‘a purchaser introduced by’ it.

The judge found in favour of the claimant and held the first defendant liable to pay commission on the sale of her house.

The first defendant appealed the decision. She contended that between L being shown the property by the claimant and the sale being secured by the third party, L’s interests in the property had ceased, only to have been reignited by contact with the third party. The claimant was not the effective cause of the sale. The appeal was allowed. Foxtons were not entitled to a fee.

The “effective cause” term was implied into the Claimant’s terms, especially as it was in a residential consumer context. The main reason for implying the term was to minimise the risk of a seller having to pay two commissions.

The notion that an estate agent could only recover commission if he introduced someone who became a purchaser as a result of the introduction sits well with the normal principle that an agent, whose commission was received on the basis of a successful transaction, had to be the effective cause of the transaction if he was to receive his commission. The same applies to Recruitment Agencies.

Make sure that your Consultants are introducing candidates to roles, ensuring that there is an introduction agreement in place & following those introductions up.

Here is a reminder of the steps that consultants should take to ensure they introduce their candidates to the roles:

This will no doubt be teaching grandma how to suck eggs, but as you can see from the cases above, slip ups do happen. And when they do, the fee is lost.

If you need any further information on this, or if Cognitive Law can be of any assistance, please do not hesitate to get in touch with Lucy Tarrant on 0333 400 4499 or lucy.tarrant@cognitivelaw.co.uk. Otherwise, thank you for reading this blog.

Recruitment Company Owners – Understanding Restrictive Covenants in Employment Contracts
Recruitment Companies – How to recruit the right people to work for you!
Contact Us
Send Us a Message
Head Office