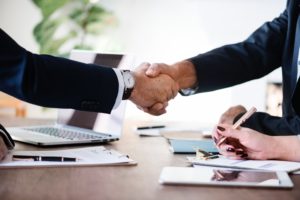 A few years ago a longstanding client was embarking on a new business venture. When he asked me to help him set everything up, I advised that as he and his business partner would be trading through a limited company, they should have a Shareholders’ Agreement and a bespoke set of Articles for the company. “What will that do?” he asked. “Well, the Shareholders’ Agreement will govern the relationship that you each have with the company, and with each other. The changes I make to the Model Articles you get when you set up your company will be tailored to your situation so that you know what will happen if one of you wants to leave, bring in another business partner, or refuses to attend board meetings so things can’t get done.” You won’t have to just rely on the Companies Act position – you can decide exactly how you’d like it all to work and everyone will be clear on where they stand.

“Well, we’ve known each other for years, we trust each other, we wouldn’t be going into business together otherwise” he said. “Of course, I replied, but circumstances can change. It’s far better to have things written down clearly. The majority of people then generally stick to it. If they don’t it will be clear what happens.” “Oh, that won’t happen to us, we’ll just sort it out between us” “Even if you’re in disagreement about the business?” I asked. The Shareholders’ Agreement can provide a mechanism to be clear exactly what happens if you reach a deadlock situation” I say. “It’ll never happen” he assured me.

However three years later he called me, slightly sheepishly, explaining that things were not so rosy with his business partner. His business partner had always intended to sell up after 3 years, it turned out – something my client had never realised. He’d pretty much left the business but was still entitled to dividends and was now threatening to sell his shares to someone my client didn’t know, or to set up in competition with my client.

It had got to the stage where they could barely be in the same room as each other and it was pretty much impossible to get agreement on even the most mundane day-to-day matters. They had reached “deadlock”.  “So – what can I do?” he asked. Well, you can ask him if he will buy you out, or vice versa. He’d already tried that, without success. What else? Winding up the company was a possibility – but who wants to lose the goodwill that had carefully been built up? “How do we even agree on how much our shares are worth?” he asked. “Ah, well, that would actually have been set out in the Shareholders’ Agreement” I reply. “Oh – I wish we’d put that all in place now” he said. “I feel like I’ve worked so hard these past few years and now I’m going to have to start all over again.”

If you’re in the process of setting up a business with 1 or more people and running it through a limited company, or maybe you’re already up and running – chances are you could really benefit from having a Shareholders’ Agreement.  Contact me for a free chat about your requirements.

To help your business be in the best position to face the challenges of the year ahead we are offering you a FREE b… https://t.co/ibvQA9Rgu2
This is a great idea. Let’s turn Blue Monday into Brew Monday. Who’s with us? #brewmonday #bluemonday #mondayblues… https://t.co/xftmF76Rk9
Sure we wish for some social interaction but 'flocking back' might be a bit extreme. Balance, flexibility and time… https://t.co/SOgG7GKlda
© 2017 Cognitive Law Limited. Cognitive Law Limited is registered in England and Wales under company number 9753152. Registered Office: 15a Brighton Place, Brighton, East Sussex, BN1 1HJ.  VAT number 196 981 441. Cognitive Law Limited is authorised and regulated by the Solicitors Regulation Authority (SRA Number 626344) and complies with their 2011 Code of Conduct |  Privacy Notice |  Our Terms of Business  | Our Complaints policy
This website uses cookies. By continuing to browse the site, you are agreeing to our use of cookies